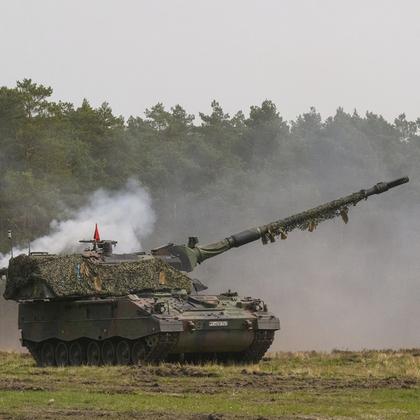 It took a long time, but now the first heavy weapons from Germany have arrived in the Ukraine. All promised seven tank howitzers 2000 have arrived, said Kyiv – and thanked the federal government.

Almost four months after the start of the war, the first heavy artillery pieces from Germany arrived in the Ukraine. Ukrainian Ambassador Andriy Melnyk said all seven promised guns had arrived in Ukraine.

Defense Minister Oleksiy Resnikov thanked Federal Defense Minister Christine Lambrecht for the delivery of the Panzerhaubitzen 2000. “This is already the sixth artillery type with a 155 mm caliber that we have received,” he explained. Previously, Ukraine had already received US, British, Polish and French howitzers. Although Resnikov thanked the German partners for their help, Kyiv still hopes for more support.

The Bundeswehr’s most modern artillery piece

These are the first heavy weapons that Germany has delivered to Ukraine. The Panzerhaubitze is the Bundeswehr’s most modern artillery piece. It looks like a giant battle tank and can hit targets 40 kilometers away. The Bundeswehr has such guns currently stationed in Lithuania to protect NATO’s eastern flank. With the Panzerhaubitze 2000, the Ukrainian armed forces hope to be able to better withstand the overwhelming Russian artillery. Ukrainian Foreign Minister Dmytro Kuleba recently said that Russian artillery is 15 times superior to that of Ukraine.

Germany had also taken over the training of the Ukrainian soldiers on howitzers. It began on May 11 at the Bundeswehr artillery school in Idar-Oberstein, Rhineland-Palatinate, and should be completed after around 40 days, i.e. this week.

The Panzerhaubitze 2000, manned by three to five soldiers, is a large firepower mobile artillery piece mounted on a tank chassis. The vehicle, which weighs more than 55 tons, was built to help your own soldiers in battle from a distance by shooting at the enemy. That is called “indirect fire support” in military jargon.

With a maximum speed of 60 kilometers per hour, the howitzer can be deployed quickly. Depending on the ammunition used, the cannon with a caliber of 155 millimeters can shoot 30 to 40 kilometers and, with the help of the built-in fire control computer, cause great damage with pinpoint accuracy. The howitzer, which experts regard as one of the most modern in the world, can fire up to ten shells per minute.

The Bundeswehr has been using the Panzerhaubitze 2000 since 1998. It actually has more than a hundred of these guns, of which only 40 were operational recently.

The federal government also published all arms deliveries to Ukraine for the first time. Government spokesman Steffen Hebestreit explained the step by adapting it to the practice of the closest allies – for example the USA. The list includes all weapons and other armaments that have been delivered or are scheduled to be delivered. It can now be found on the website of the federal government. So far, it was only visible to members of parliament in the secret protection office of the Bundestag.